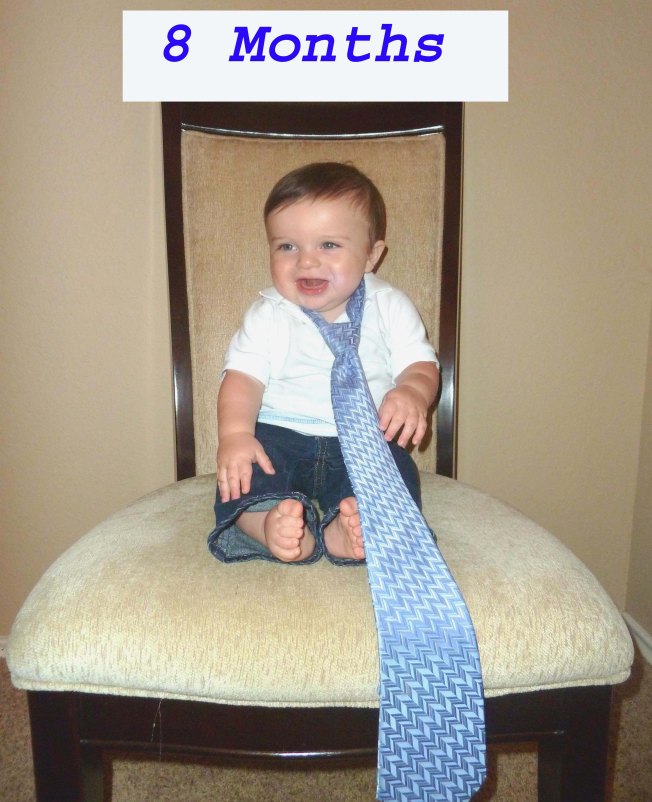 Hard to believe that this was our big baby at 8 months! He is crawling everywhere, standing up on everything, babbling up a storm, gets upset when he does not get what he wants, puts everything in his mouth, laughs all the time and just loves! He is serious when he meets a stranger, but never cries or refuses to be passed around. He is on target and developing on level or in some cases early. With adoption, you have no idea how progress will flow. In fact, I was a little scared when he did not get his first tooth by 8 months, but then it popped up a few weeks later. We are so blessed that he is growing, healthy, happy and smart. We truly have the baby God knew we could handle and the baby that God created for us. We are so blessed and amazed at his work.

However, having such a great experience…sleeping through the night at 8 weeks, eating healthily, no sickness, no doctor visits except for check ups….makes wanting another a little more powerful. We always thought that we would have two if we would have conceived, but here we are starting out with number one at 33 and then thinking ahead to when could we envision number two?

The truth of the matter is I am not sure we can or will. Conceiving for me would be almost dangerous. My body is healthy as it is, but carrying a baby would be a challenge. Hormones set my immune system off and you kinda need a lot of hormones to carry a child. I am not on birth control as my body natural attacks sperm and I have numbers to prove that I am in premature ovarian failure, but a pregnancy would be very uncertain although I know God is bigger than my fears. I don’t feel comfortable preventing a pregnancy, but I am also unsure if I could handle a pregnancy….I know that does not make sense.

We say no to donor eggs and surrogacy is beyond us…so our only option left would be adoption. Maybe in a few years, the pain of the hard work to adopt will wear off, but not right now. I remember how hard it was! I remember the meetings, paperwork, traveling, waiting and worrying…not interested in doing that again. In addition, God provided every penny so that the entire thing is paid off, but we would have to start from scratch to do it all again. The truth is that God placed adoption on our hearts the first time, I am not sure that he has not replaced it for a reason.

We always thought of his birthparents ever had another one then we would consider, but that looks unlikely too. So, here we are never thinking that we would be one and done, but not able to comprehend the scenario of how would two come about. If two was meant to be then it will happen. We never thought adoption was in the cards for us the first time until God did a miracle, so it is out of our control. But if in five years from now we have two then I will be shocked to tell that story because right now I cannot imagine. You may ask, “Why now…wait a few years.” But the reality is I never though my first would be this late, so I can’t imagine a second much later. My parents had me at 23…I expected to be a younger mom than this. God’s plans are different and our son was born at the perfect time…it is all perfect…but not my plan if you know what I mean.

So here is the gripe of it all. I get jealous of those that just say “Let’s have another” Like planning a family is that easy. We want two, three, four, five and they just have sex and it is done. Some have it like that…conceive naturally, the delivery is relatively low cost and you do it again whenever you want. Not us. It’s all more difficult than that and we can’t just decide we’ll try for another. Those are not our cards.

I want what I can’t have which is the control of it all. I got something way better in my son, but my heart right now says that he might be it. God might give us the opportunity to raise an only child and I am unsure how I feel. I love my sibling, but I don’t have a choice. We are coming to grips with raising one. In our society, it is becoming more normal…social media has you surrounded by people all the time. His cousins are only children so they can band together and be like brother and sister. He is also around a lot of kids and Lord willing will be on a team where his team is like his family. I dream of him exceling in something where we could only do it because we have him to focus on. I know God planned this for a reason, but it always makes me wonder about the future and what God will do.

The good news is: if our son is our one and only then we are the most blessed parents in the world. Finding him is the greatest thing we have done. I was born to be his mom. I was created to parent him. If he is the only child I parent, that will be enough.