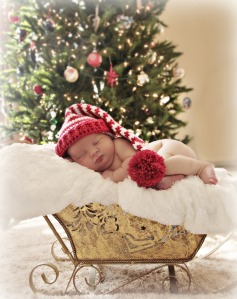 So the whirlwind craziness of two weeks is wrapping up.  Starting on December 10th with the arrival of our son!  We were on Cloud 9 getting to meet him and see how healthy and big he was.  We quickly called or texted our family and friends to share the big (literally) news.  Later, on December 12th, we learned that all the papers were signed and we could officially breathe again.  We could call him a Tyndall without fear of something going wrong.  Neither of us expected anything to fall through, but I was still cautiously optimistic.   The world was perfect for us that day and life was good.

Later that evening, we learned my grandmother had a stroke while on a cruise in Mexico and they were struggling to get her brought back to the states.  If she died in Mexico, it would have taken eight weeks for the govt. to return her body per their regulations.  We put her on life support and got a private jet to bring her home.  After arriving in America, they flew her to Houston to seek medical care.  After four days of testing, they concluded the massive stroke affected her speech, breathing and eating.  She was doubtful to recover without needing life support and this was against the wishes in her will.  We drove her in an ambulance back to Dallas to spend her last few days in her bed.  She did not make it past one a.m.  She died forty minutes after her birthday was over.  Grateful for her life, but shocked about her death described my emotions.

I had this precious son so full of life, but I was grieving the death of one of the closest people to me.  She was that grandmother that was extremely involved and present.  The one that I thought of when I thought of a grandparent.  It is hard to believe that she is not here since she always has been.  I can’t complain because I had her in my life for thirty three years.  I teach kids that lose their grandparent everyday…but this is my first grandparent (out of four) that has passed.

I took Callen to her viewing on Friday and enjoyed showing him off to family that I had not seen in years.  Thank God he was here in time to be on her obituary.  He was her second great grandchild.  Everyone enjoyed smiling during the pain as we welcomed a new life.  Those that did not know we adopted, complimented me on getting my figure back so quickly.  I smiled and thanked them then politely told them our story.  Most felt relieved that I was not a freak of nature that lost the weight to so fast.  On Saturday, we attended her funeral and buried her while Callen slept with a relative at home.  We later hosted our first Christmas party at our home and he was the hit of the party.

I am still shocked she is gone, but still thankful that my God is so good to us.  He gave us life at the perfect time.  He gave us a perfect child for our family.  I am enjoying every moment-even the late night ones.  Needless to say, with all this stress I entered into a minor flare.  My joints began to ache, I felt rundown and a little feverish.  I took extra Prednisone and it all went away.  Nothing can stop me from this joy.  I hope now that the emotional roller coaster is over then I can go back to normal.  God is so good to us and this is a joyful season to celebrate our Savior. We praised him in the pain and we praise him in the victory.

The good news is: “Every good and perfect gift is sent from above.” James 1:17  Merry Christmas blogging world.  “Sorrow may endure for a night, but joy will come in the morning.”